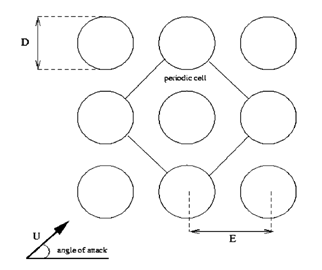 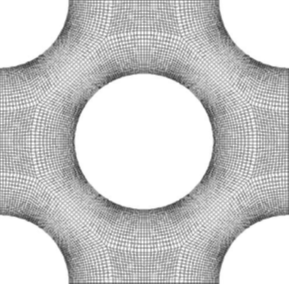 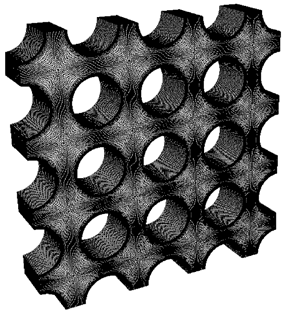 The resulting domain and the created mesh can be seen in Figure 2 (left). In this example, the mesh contains 12,805,120 hexagonal cells. The mesh for a single tube is copied in a formation (3x3) to create a bundle which can be seen in Figure 2(right). With this methodology, it is possible to reach over 200 million cells with a small effort. Code_Saturne is able to copy or multiply one single mesh zone to create larger domains or merge different mesh zones which are created separately. This process can be done in parallel to avoid memory overflows. More details about the flow parameters and mesh can be found in Moulinec et al. [1], Benhamadouche and Laurence [2] and Fournier et al [3]. In these benchmark tests, 4x4 (51 Million) and 16x16 (204 Million) configurations are used as seen in the next table.

Simulations are performed for 100 time steps for each simulation. The time step size is 2x10-5 seconds. The performance is measured based on the average of wall clock time per each time step during the simulations. Figure 3 shows the performance of the Code_Saturne for the problem from 51M and 204M mesh. For 51M mesh, there are two partitioning methods have been applied. As seen in the Figure 3, the scotch method is not bringing any advantage especially on higher number of cores. For larger mesh (204M), simulations are not available for the scotch method for the moment. Scalability is measured and plotted in Figure 4. The Y axis shows the number of time steps calculated per second. For both partitioning methods, the parallel efficiency is relatively high for 1024 cores based on the 512 cores, around %90. For 2048 cores, the efficiency slightly drops to %67 for SFC and %77 for the scotch. For the highest number of cores, efficiency stays in a reasonable value of %48 and %44 for the SFC and the scotch respectively. 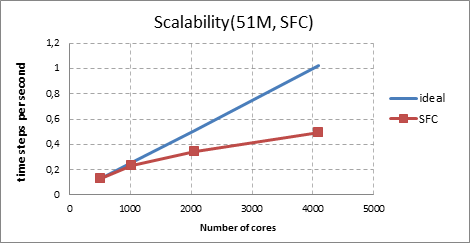 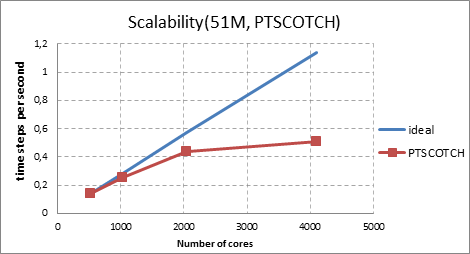